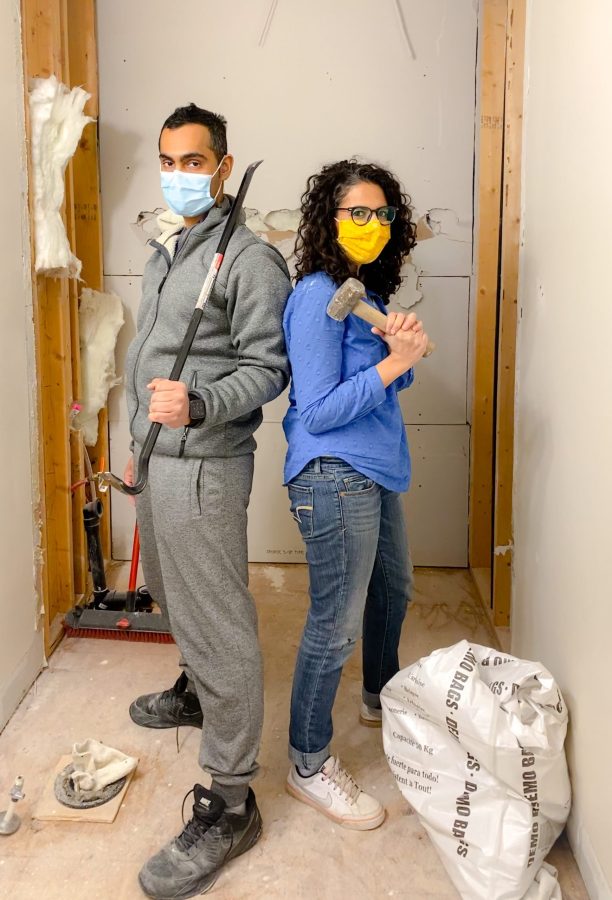 Week 2 demolition hit us harder than we anticipated. I thought it was going to be all fun and smashing tiles. It’s hardly been that at all. I can’t wait to finish the demo so we have a clean slate to work off of. This week we:

Yes we finally did it! We finished demoing the entire bathroom and it looks and feels amazing.

After my brother Neal pulled up all the tiles we looked at what was remaining and at first we didn’t know the challenge that lay ahead of us. We thought we would simply be removing the old mortar off of the ground. Boy we were wrong. Neal rented a jackhammer and as we started, we realized there is about 2 inches of poured cement over the subfloor. I pushed Neal to remove all the cement because I’m a fan of “do it right, do it once”. We debated for a long time but he finally agreed. So, we spent the better of five hours getting rid and cleaning up all of this.

It was really messy, really dusty. I really recommend wearing a mask and have a good ventilation in the area if you can. The dust went everywhere into the hallway and we even had to put towels under the door so it wouldn’t go into the kids room that was adjacent to the bathroom. But it was so worth it! Poor 8 month pregnant Asma used her shop vac like 4x in one day because there was so much debris.

Once the flooring was cleared out then we had to remove all the tiles from the tub and also the tub itself. Pulling off the tiles from the wall was not that hard except that we didn’t realize that there would be drywalling and insulation on one wall the tub. In retrospect, it makes sense because my brother lives in a town home and that wall is connected to his neighbor. So we still have to patch up the drywall.

To remove the tile we simply smashed across the middle. Then my brother cut all the caulking off on the side bottom and top of the tub. Use a reciprocating saw to get the drywall off. Careful not slice any 2x4s off so don’t go too deep with the saw. Using a hammer or a crowbar you just have to pull the tiles off of the wall. Once the tiles are off the wall just remove any excess screws or nails that may be left behind in the studs.

Neal asked his brother-in-law to come over to help remove the tub. It was surprisingly easy as the tub is made out of acrylic and held in by a few screws.

Neal also had to turn off the plumbing and remove all the old plumbing from the shower. This is something I have never done. I want to get better with plumbing but to be honest, I let Neal handle it hahaha.

What to expect in week 3

How to tile a bathroom wall

Challenges of installing a bathtub

How to create an accent wall that wows